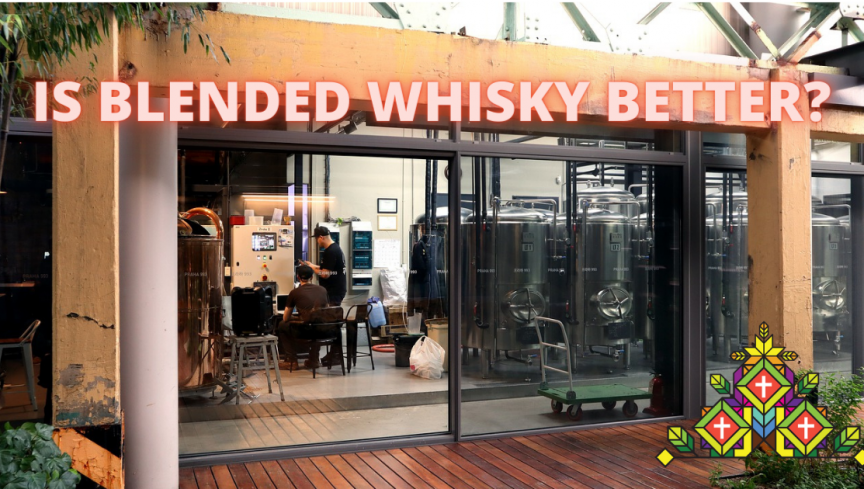 All whisky is blended, it’s a matter how, and when

PART 4 – Why I love Canadian Whisky? – Blending for perfection!

In honour of Jim Murray’s 2020 Canadian pick for “Best Whisky in the World”, let’s go deep into Canadian Whisky.  Let’s look at some of the things that make Canadian whisky truly unique and worthy of best in the world status. Canadian whisky blenders work long and hard to make great whisky.

Whether the desired outcome is consistency, or novelty, the Canadian approach to whisky-blending has advantages.  Just as wine is blended to achieve a particular flavour profile, so is Canadian whisky.  Bordeaux or Rhone wines are not one grape variety, but several varieties blended together.

The goal is to create something that is greater than the sum of the parts, with flavours that compliment and build upon one-another.  The blender can alter the formula to compensate for deficiencies, or accentuate brilliance.

RECEIPE – IT’S NOT OVER ‘TILL IT’S OVER

Creating the blend is when the hard work of a devoted distiller comes together with the sensory gifts of the blender. This crucial step can be profoundly satisfying.  It is the stage when a good and consistent whisky is re-produced, or when the epiphany of a truly great and whisky is realized.  This is the make-it or break-it moment.

Most whiskies are committed to a formula from the beginning.  For example, a Bourbon recipe might be 70% corn, 20% malted barley, 10% winter wheat. The distiller chooses that recipe because it is a formula that has worked in past, or perhaps it is an experiment.  The Bourbon distiller won’t know the results of an experiment until much later when the product has aged. Blended grain means that the recipe is “handcuffed” to time in a barrel.  The flavor profile of a new recipe won’t be known until the whisky is aged.

Just like grapes, the quality of grain varies from season to season and region to region. Consistent quality will not be achieved by simply mixing grains together the same way year after year. Despite what big manufacturers would have us believe, taste and quality of whisky is variable from year to year.

If you are fortunate enough to taste a bottle of Canadian Club or Seagram’s from the 1970’s, you will enjoy something remarkably different and more flavorful than today’s offerings.  Why present-day offerings from the big whisky makers are plain compared to older blends is anyone’s guess, but the likely culprit is cost-cutting.

BLENDING AT THE END IS OPPORTUNITY FOR EXPERIMENTATION

From an innovation point of view, blending is also the opportunity to create something entirely new and original.  The Canadian distiller can be more experimental, blending spirits from exotic, heritage grains, like quinoa, spelt or sorghum.  Each can be individually processed with different yeasts, using different stills, or exotic wood barrels.  If an experiment fails, the only loss is the individual batch or barrel, not an entire run.

TO USE A COOKING ANALOGY

Canadian whisky is like a stir-fry. The chef can make a judgement call to add more garlic, or less ginger depending on how it tastes.  By contrast, Bourbon is baking a cake, where ingredients are blended at the start, and there is no opportunity to change the amount of sugar or spice after it’s cooked.

CANADIAN WHISKY-MAKING LENDS ITSELF TO CREATIVITY

A great new whisky is difficult to create if the maker must wait years to taste the outcome of a new recipe.  Also, the variability of crops, barrels, and weather conditions through years of maturation can make the success of test batch difficult to judge.  The Canadian method separates the variables more effectively, and reduces the influence of happenstance.

The Canadian distiller not limited to a single grain, or proportion of grain in their spirits.

They can use different-grain spirits to build an inventory of distinctive flavors.

New recipes can be made quickly from an inventory of mature spirits with distinct flavors.

Blending at the end of the process allows the distiller to make products that are consistent.

Why I love Canadian whisky; A Four-Part Series

Part 3 – Process – Canada’s national Spirit Crafted like No Other